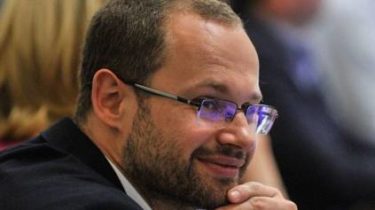 The people’s Deputy from people’s front Pavlo Pynzenyk obliged to refute the false information about OO “Center of counteraction of corruption“about the money laundering.

The decision adopted by the court of Appeal of Kiev, reports CTC on Twitter.

“To oblige Pynzenyk Pavel Vasilyevich within one month from the date of entry into force of the decision of the court to refute the false information by the ads aired on the parliamentary TV channel “Rada” in the “Briefings” of the operative part of the court’s decision”, – stated in the text of the resolution.

Besides Pynzenyk needs to pay the court fee in favour of the CPC, Vitaly Shabunina, Daria kaleniuk and Alexandra Ustinova at 4032 hryvnia each.

According to the court, statements by Pynzenyk of money laundering by members of the CPC, recognized as “untrue and discrediting the business reputation of the organization” as well as discrediting the honor and dignity of Vitaly Shabunina as the head of OO “Center of counteraction of corruption”, Alexandra Ustinova and Darya kaleniuk.

“And we expect to close criminal proceedings against us that was filed on the basis of statements of people’s Deputy”, – said the yet.

We will note, in may 2017 Pynzenyk through the “Rada” TV channel said that he will ask to check the activities of the NGO “anticorruption action Center” from-for suspicions in money-laundering and is also wanted CPK deprived of the status of non-profit organizations.

Deputy Pynzenyk will not only have to publicly refute the lies about the CCP, but also to pay court fee in the amount of 16 thousand UAH. And we expect the closure of criminal proceedings against us that was filed on the basis of the statements of the MP.

We will remind, in the summer of 2017 investigative Department of the State fiscal service of Kyiv instituted criminal proceedings against the Center of counteraction of corruption. The Chairman of the Board of CTC Vitaly Shabunin called it a continuation of pressure on the organization and intensification of attempts to block its work. According to him, the new case was filed again by Pynzenyk. In turn Pynzenyk has denied any involvement in the opening of the case against Shabunina. In accordance with the response of capital Prosecutor’s office at the request of the Deputy, a report about possible violations in the activities of non-profit organizations served not the people’s Deputy, and the Director of OO “the national interest of Ukraine” V. A. Apasov