Russian mercenaries are recruited residents of Donbass to war in Syria 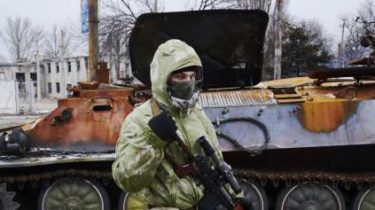 In the occupied Donbass of the Russian recruiting centres select “volunteers” to the war in Syria. This was during the briefing said the speaker of the defense Ministry ATO Dmitry Gutsulyak, referring to the information of intelligence.

As noted, people selected among the local population, as well as from units 1 and 2 army corps of the Russian occupation troops. Preference is given to those who already have experience of fighting in the East against the Ukrainian military.

At the airport “Borispol” detained the recruiter of terrorists

Gutsulyak said that the selected “volunteers” are sent to the collection point in the Rostov region. There is additional training and allocation of personnel.

Also, the speaker of the Ministry of defense said that during the campaign recruiters to hide from the candidates about numerous cases of violation of the terms of the contracts. Private military companies ignore the cases when the families of the victims did not pay the allowance and their bodies did not return home.

Recall that in Borispol airport border guards detained a citizen of Kyrgyzstan, who was wanted by Interpol for his involvement in terrorist organizations. The man is in the international wanted list and is a recruiter of militants to terrorist groups.