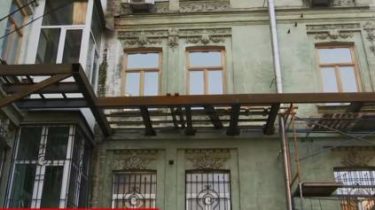 In the center of Kiev, the owner of the apartment decided to make repairs in the house-a monument of architecture and to finish a balcony where it is not provided in the wall of hammered iron beams. This resulted in cracks in a historic building and that threaten its destruction, according to a story TSN.19:30.

Beams with extension to 2.5 meters appeared on the third floor of the green building on Shota Rustaveli street. Outraged neighbors say they did son of the former agrarian Minister Prysyazhnyuk Vadim Simonov, who himself was an officer – Deputy Chairman of the Veterinary and phytosanitary service of Ukraine. On the phone he explained that he was preparing an apartment for a large family, but now plans on balcony had refused. “What is left – all will cut off. Ceiling doing there. Don’t pay any attention to it. Ceiling because there will be a live big family. Immigrants,” explained the owner.

In the center of Kiev, the owner of the apartment decided to make repairs in a historic house. In order to finish the balcony where it is not provided, the walls of hammered iron beams. This led to the cracks. In case of failure to return home the original appearance, the owner may face a fine or restriction of liberty for up to three years. 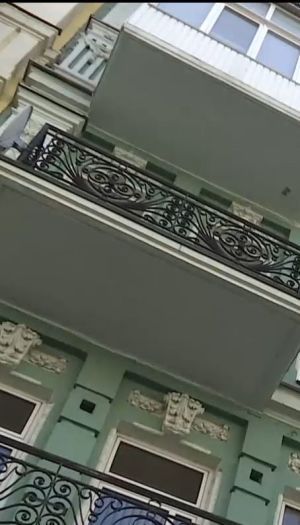 That delivered beams to strengthen the floor, the neighbors did not believe, because Simonov informed spoil the look of a historic building plastic balcony in her new apartment. Architect George Duhovichny in the 1990s, conducted a major restoration of the apartment, which now belongs to the family of Simon, and worried about any changes. “I am very sad because this apartment was a model of artistic performance of the housing stock of Kiev of late XIX – early XX century. There was a fantastic moldings, there were four different fireplace historic”, he said.

In Kiev broke out, the monument at the hem

In the management of cultural heritage protection KSCA has already told the apartment owner about the requirements: to remove the beam and return the facade is authentic. “There were no permits, no project has been agreed. It’s terrible behavior, it is disrespectful to the cultural heritage. Should be punished for this” – said the chief specialist of the Department of inspection of state control of cultural heritage and archaeological supervision Vartan Azatyan.

Such interference in the walls reduces the safety of residents of all apartments, experts say. “Destroyed bearing structures of the walls in this apartment. And what the consequences will be when this house falls or will develop – nobody can tell”, says Duhovichny. In case of failure to return home the original appearance, the owner can expect a fine or restriction of liberty for up to three years.