Sobchak believes the annexation of Crimea illegal, but not want to return and offering to hold a referendum 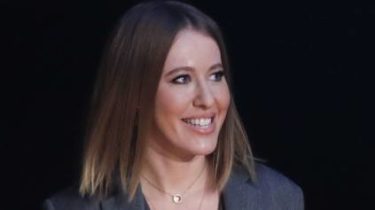 The future candidate in presidents of Russia Ksenia Sobchak recognize the presence of Russian military in the Donbass and is confident when they will withdraw from there, the armed conflict must end. She also recognizes that Russia illegally annexed the Crimea. However, just because of his return to Ukraine Sobchak does not want – offers to hold a referendum.

She said this during a speech at the American Center for strategic and international studies (CSIS), reports “Voice of America”.

“There (in the Crimea) are Russian people, the people who support the affiliation of Crimea to Russia. We need to take this into account. To solve this problem, I see only one way – the international referendum, which will be attended by all people who live in Ukraine, and all people living in Russia – all together – on the status of Crimea. The referendum will be three questions: should Crimea be independent, should Crimea be part of Russia or part of Ukraine”, – said Sobchak.

One of the participants asked her, would be considered fair if China, with a population much greater for Russia, captured part of the Russian territory, and then proposed to hold a referendum on its membership.

“There’s no comparison, – said Sobchak. – Crimea was Russian for many, many years since the time of Catherine the great. It is not China that comes over some territory. In the Soviet Union, this territory belonged to Ukraine, but lived there the Russian population, the Russians lived there – not Ukrainians. And when the Maidan happened in Ukraine, we have become the aggressor and did what we did – what I do not support. But perhaps you don’t understand every time I stand before people and say that Crimea under international law of Ukrainian territory, I jeered. It’s not a fake poll – 90% of Russians like the idea that the Crimea – Russia. And people in Crimea like to be part of Russia. In this conflict they wanted to be with Russia.”

Sobchak: Surkov blood on his hands. He is responsible for what is happening in Ukraine

The politician believes that as soon as Russia withdraws its military from the Donbass, the conflict will end there.

“I am convinced. This artificial conflict with the Russian side”, – said Sobchak.

Also in Washington Ksenia Sobchak said that she wants to meet people who are in the administration of Donald trump responsible for sanctions, and to explain to them that Russia is not only Putin. She told me that she does not believe that will win the election, but the campaign should give her a chance to start a serious career and politics to bring an alternative point of view to the Russians.