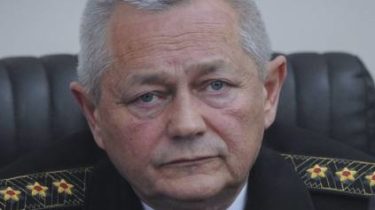 Former chief of the General staff of the armed forces Yuri Ilyin began to cooperate with Russia in February 2014 and the Ukrainian military declined to treason.

This was stated by former acting Minister of defence, the former commander of the Navy Admiral Igor Tenyukh, during a questioning in the Obolon district court of Kyiv on the case of treason, deprived the title of President of Ukraine Viktor Yanukovych, writes “Ukrainian truth”.

“Ilyin then bowed three times to the change of the head of the Academy of naval forces Goncharenko, he moved to the side of Russia. It’s official. After the tenths of numbers. I am responsible for my words,” he said.

In addition, the Admiral said the process of “surrender of the Crimea” Russia began in 2010, when Ukraine’s President was Viktor Yanukovych. Then there were staff cleaning, downsizing of fleet, disbandment of military comisariatos, manning Navy contracted residents of the Crimea. In particular, the military stressed that he was also fired from the post of commander of the Navy arbitrarily and without explanation.

“I am defense Minister Yezhel on the phone only said: “You’re not the commander”. And according to my sources, they then received instructions from the Kremlin: “to get this Bandera”, – summed up Tenyukh.

We will remind, earlier ex-the head of the SBU Valentin Nalyvaychenko told about the betrayal of the SBU in the Crimea in 2014 and refusing to unblock the Parliament of the Peninsula. He told how many officers remained loyal to the oath.