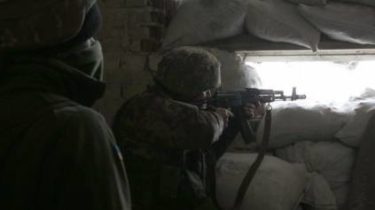 For Monday, February 12, in the area of ATO in the Donbas the militants 11 times opened fire at positions of the Ukrainian army. During them a Ukrainian soldier was killed two more were wounded.

On the Lugansk direction the highest firing voltage was observed in the Crimean. Near this village the frontline fighters several times during the day fired at Ukrainian strongholds with 120-mm and 82-mm mortars, grenade launchers and small arms. Nearby Popasna – applied mortars caliber 82 mm grenade launchers of various types fired at the Ukrainian fortifications near Katerinovka, Svetlodarsk, Novoluganskogo and Zaytsevy, and near Novgorod made several shots from heavy machine guns.

On the Donetsk direction in the evening the militants have used 120-mm mortars and heavy machine guns on the approaches to the Water that the sea of Azov. Ukrainian positions near Experienced militants fired with automatic mounted grenade launchers and small arms including heavy machine guns.