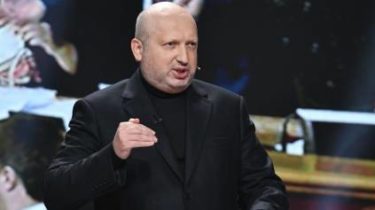 Secretary of the national security Council and defense of Ukraine Oleksandr Turchynov threatened by Deputy Sergei Leshchenko court for publishing in Facebook that says about the involvement of Turchynov to relatively Trukhanova plant “region”.

This reports the press service of the NSDC Secretary.

Yesterday, February 13, Leshchenko posted on the page in Facebook publication, which States that the illegal material gain from the sale of the plant “region” in Odessa was supposed to go to Turchynov and Deputy Alexander Oak.

“Very alarming”. The source said the first details of the arrest at the airport of Odessa the mayor Trukhanov

“On the days I unofficially came people Trukhanov with the history that the money from this Scam factory “region” was intended not to him but to Turchynov Oak. Don’t know who is right. But what can I say, Mr Trukhanov, we do not know and have never talked. But do not believe those who promise to solve NABOO or influence them across America. If the Scam was involved named person, in your best interest to give them testimony. It would be better for you and Ukraine,” writes Leshchenko. 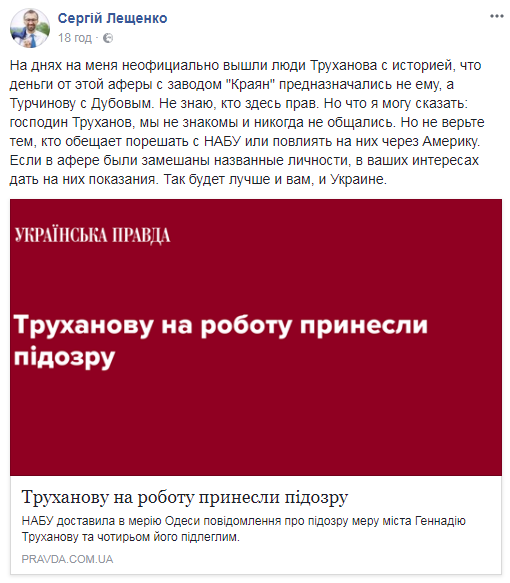 Oleksandr Turchynov with his spokesman responded to the statement, calling it a lie.

The mayor of Odessa, Trukhanov reported about suspicion – NABOO

“Using only given them the link to the alleged “informal information from unknown sources”, you can also make a conclusion about the possible involvement of the S. Leshchenko to the named business and his interest in this matter. S. Leshchenko have to refute your provocative statements, otherwise V. Turchynov will go to court”, – is spoken in the message.

Recall that the mayor of Odessa Gennady Trukhanov who declared suspicion in a corruption case, today, February 14, in the morning he returned from abroad to Ukraine. The official arrived by plane from Warsaw to the airport “Borispol”. There he was detained by the guards, who then gave Trukhanov employees of the National anticorruption Bureau of Ukraine. Also at the airport “Borispol” on February 14 detained the Deputy mayor of Odessa Paul Vogelman.