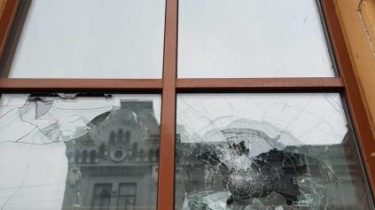 Pogroms in the center of Kiev, during which was damaged banks “Sberbank” and “Alfa-Bank”, as well as the building of “Rossotrudnichestvo” will be the responsibility of the organizer.

This was stated by a spokesman for the Metropolitan police Oksana Blischik the TV channel “112 Ukraine”.

“Is the organizer of this action, which was filed by a specific statement to the Kyiv city state administration, he is primarily responsible for how will be action. There are groups of documentation. I mean on the part of the heads of the police, which record the calls of the people to any radical action, and, in fact, record the illegal actions. Of course, traditionally, criminal proceedings will be begun, if we have a request from the representatives of all institutions that were damaged. Within these criminal proceedings the police will give a legal assessment of the actions of participants,” she explained.

According to Blischik, law enforcement officers during the protest record all calls for illegal actions and the actions themselves, besides representatives of the police communications warn participants of the consequences of possible violations.

Separately, the press Secretary of police said that while the police did not detain any participant of the stock, there is also no information about the victims.

In turn, the Department of communication of the National police of Ukraine said that Kiev events was attended by about 6 thousand people, law and order in the capital, followed by about 3 thousand militiamen.

“In the whole Ukraine participated in the events for the commemoration of the Heavenly hundred Heroes and heroism in the revolution of dignity took more than 14.5 thousand persons. in particular, In the 8 regions of the country in 22 settlements was 34 events. During mass events in Ukraine, the law provides about 4,5 thousand militiamen. The law enforcement were involved in the various departments of the national police, including the police dialogue, explosives, tactics and handlers,” said the Agency.

We will remind, representatives of the “Movement of new forces”, said that on 18 February at the Independence square in Kiev announced the “resignation” of Petro Poroshenko as President of Ukraine and announced rallies across the country.

During Assembly on Mykhailivska square near the Parliament there was a tense atmosphere. The building is massed law enforcement officers in full riot gear. In turn, the activists who came out to “March for the future”, also pulled his hand to the tent city near Parliament.

The Department of communication of national police of Ukraine
,
112.ua