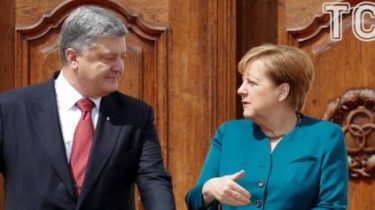 The fourth anniversary of the events on the Maidan Ukrainian President Petro Poroshenko has held a phone conversation with Federal Chancellor of Germany Angela Merkel.

“The interlocutors discussed the state of implementation of the Minsk agreements, noting the need to consolidate the ceasefire”, – stated in the message.

As noted, special attention during the conversation was paid to the issue of the release of the hostages.

“The two sides stressed the need to continue to work together to release in the near future of all Ukrainian hostages and political prisoners,” – said the press service.

Also Poroshenko and Merkel exchanged views on the resumption of effective work of the ad hoc center of control and coordination in the Donbas and the possibility of the deployment of the UN peacekeeping mission in certain districts of Donetsk and Lugansk regions.

Separately, the two leaders discussed further cooperation in realization of the program of reforms in Ukraine and agreed to continue contacts, in particular, regarding the “Normandy format”.

Recall that in Munich during the secure conference, Poroshenko has held a meeting with the Prime Minister of great Britain Teresa may, which also discussed the deployment of the UN peacekeeping mission in the occupied part of Donbass.