In Kiev recorded a third over the past year, the mass poisoning of people sushi in the same restaurant 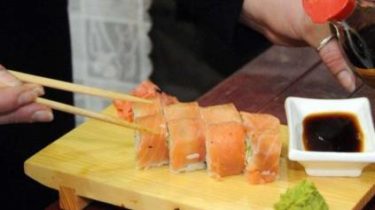 Over the last year in Kiev, recorded the third case of infection with salmonellosis after eating sushi “Philadelphia”. Victims of poisoning were five people. Three went to the hospital.

All cases were in the same school catering. This is stated in the plot program “snidanok z “1+1”.

As said one of the victims, 25-year-old Diana Rakus, she woke up at night due to high temperature and full obessolivanija. According to her, the night before she was having dinner with my sister at a Japanese restaurant.

“The sister offered to call an ambulance, but we decided to drink the drugs that were at home and in the morning I feel better,” added the girl.

It ended only slight poisoning, so she quickly forgot about the incident. However, the consequences could be much worse. So, in June of last year, more than 40 people were poisoned sushi in Kiev. Then the victims were in no hurry to go to court.

“Of 40 people wanted to go to court only three, and everyone else I know took several thousand hryvnia from the restaurant in which they ate, and fell silent. That is: sorry, we can veer for two thousand hryvnia,” – said the lawyer Sergei Panasyuk.

The state foods and consumer service held a regular review of institutions and without disabilities has not been.

“The results of sanepidemstantsiya revealed a number of violations of technological processes and sanitary regime and other violations that could detect those diseases that we have,” – noted in the Department.

Now there are special laboratory tests to make definitive conclusions. One reason may be the disease one of the employees.

Final research results will publish in the near future. Despite the ban, a Japanese restaurant, where a few days ago there was a poisoning, still works.

In turn, the trainer-auditor another network of restaurants of Japanese cuisine Dmitry knows all the rules and regulations of sushi. He claims that fish easily poisoned, if it is stored improperly.

“We have spetspribor in the restaurant. We can check the storage temperature of the fish. Chef three times a day checks the temperature and records it in specialsale”, – he said.

Out to thaw fish for sushi can only be in the refrigerator in vacuum packaging at a temperature of 2-6 degrees below plus within 12 hours. Then after processing, the salmon is stored in closed sealed boxes with expiration date. For these are strictly followed. All employees have sanitary books, and their authenticity checks special person.

Test visually or by smell the freshness of the sushi is quite real, and to learn about their infestation is possible only through laboratory analysis.