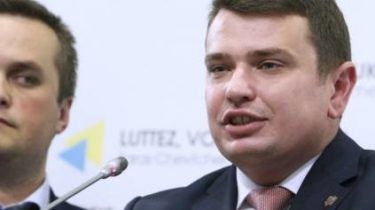 He could “leak” information to the defendants in the case of theft in Odessa city administration.

This was stated by the head of the anti-corruption Bureau Sytnyk in interview to the edition “Mirror of week”.

“Stalled the investigation for months did not sign the documents. Only through passionate debate, discussions that went beyond anti-corruption bodies, we could obtain the necessary signature in some right cases. Some suspicions didn’t sign up for one and a half to two years lying dormant. We have won business disputes in these cases have invalidated unprofitable for the state to void contracts,” – said the head of the Bureau.

NABU said as helped the GPU in the “case of Holodnitsky”

According to him, the NAB because of disagreement with the pad in the suspected main defendants in the case could not prosecute the really guilty persons. He also cited several cases in which Holodnitsky blocked the process of the investigation.

“For example, the case in respect of assignment of debt to a private company for the electricity supplied “Cherkassyoblenergo” industrial consumers – suspicion waiting to be signed. In one case the purchase of fuel for “Ukrzaliznytsya” we have been in the commercial courts of the three instances. Recognized agreement between WOG and “Ukrzaliznytsya” is invalid. Established violations during their detention,” – said Sytnik.

However, in the case of “Ukrzaliznytsya” SAP has blocked the investigation, even after winning in court, and the appeal, which also won the NAB.

Referred to the Chairperson of the Bureau on the case on embezzlement of funds of the city administration of Odessa. Then NAB came with searches to the defendants, but they have already left, someone “solved cases with the courts”, being abroad for several months.

“We have good reason to assume the “drain” of information to defendants by the head of SAP, which, as it turned out, knew about the movement of information, which consequently did not own,” said Sitnik.

However, according to him, the main wing of the ARS consists of responsible people who have decent values and strive for the best result. Therefore, Artem Sytnik notes the importance of continuing the work of the Prosecutor’s office and the inadmissibility of its collapse.