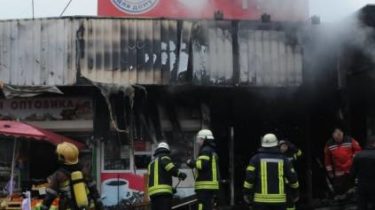 Architect checked, where in Kiev it is possible to fire the Mafs.

The fire in the LFA, which recently occurred in the capital at the entrance to the metro station “left Bank” forced the government to pay attention to the kiosks near the metro and bus stops.

If they find violations of fire safety – the facilities will be closed, promises the Metropolitan government. The rules of fire safety in the subways is forbidden to place commercial and commercial properties within 20 metres of the entrance to the subway. Next to the burned stand such a dozen.

“Dulcic lit up girls. Well, the heater,” says the saleswoman from a nearby store, says the story of “Breakfast with 1+1”.

The journalists together with the architect inspected the streets of Kiev. Trade at the Central railway station starts near the entrance to the subway. “On the forecourt are at least hundreds of thousands of people. She needs to be protected from all obstacles during evacuation. Area reduced by 45% at least, it is due to this stuff. One will light up – hook everything else” – says a leading architect of the capital George Duhovichny.

A meter from the ventilation shaft subway kiosk with technology. “Imagine if something on fire. All the smoke will go in the subway. Halabuda + plastic. It will flare up and burn out in 15 minutes,” says the architect.

Dozens of Kiosks located near the underpass on the area of Leo Tolstoy. “God forbid, just turn off the light. Then you won’t have nothing to catch fire, people will just begin to run from the underpass. Someone will fall and will continue to run on it. And where there is an emergency exit, all made of plastic. This not only contributes to the fire, but also emits toxic fumes that paralyze the respiratory system. People suffocate,” says George Duhovichny.

Recall, March 28, at about 17, near the entrance to the metro station “left Bank” the fire broke out. It was visible even from the right Bank. Just when the passengers of the subway came back home. Firefighters coped with the fire for 2 hours. Fortunately there were no casualties.

Not only the capital suffers from violators of fire safety rules. A month ago in the center of the Dnieper lit up the LFA with Shawarma. The flames spread to 4 nearby kiosk that was completely burnt. In Kharkov a few weeks ago firefighters 2 hours to extinguish the fire, which covered the 2 with the press kiosk in the underpass. Fortunately, has done without victims.

The fire of the LFA, which recently occurred in the capital at the entrance to the metro station “left Bank” finally forced the government to pay attention to the kiosks near subway and bus stops and to begin. In the case of violations of fire safety include things promise to close. But while in Kiev will impose order, “Breakfast” decided to see the danger faced daily by the Ukrainians. 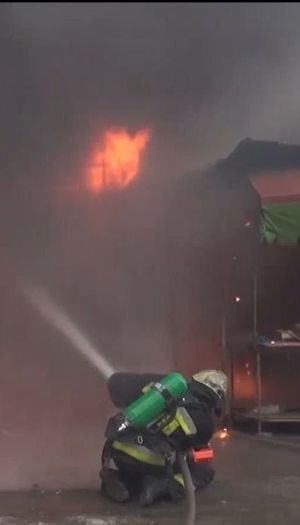