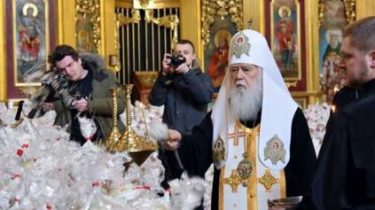 On the packaging of the cakes was a picture of a bright logos of the party “Batkivshchyna”.

Monday, April 2 at the Cathedral of St. Michael was consecrated 5000 cakes for soldiers and residents of the ATO zone.

Truly he is risen. How a year has changed the cost of the Easter basket

The consecration of Easter cakes was attended by the Primate of the Kyivan Patriarchate, Patriarch Filaret and other members of the clergy, as well as politicians, activists and the military.

“Our Church as in previous years, cares about our soldiers, who do not spare their lives and protect our Ukrainian land. Cake is not just bread, but it is a sign that this bread is associated God himself, who is Life,” – said Filaret. This news could pass unnoticed, however, the packaging of the cakes was a picture of a bright logos of the party “Batkivshchyna”, with the support of which they were purchased.

Journalist Marina Danilyuk-Ermolaeva shared photos in Facebook, accompanied by a criticism of political power: “All anything, but the party’s symbols and paraphernalia of a woman who goes to the President. Propose a slogan: “Your mother and war get!”

The publication has collected dozens of comments. Some users noted that there is nothing extraordinary, others were outraged because of the “political ads of questionable morality.”

The news responded as and well-known volunteer Roman Donica, who criticized already at the Kiev Patriarchate.

The UOC-KP received support after independence and during the war with Russia. With Russia, one of the most loyal allies of which many years remained Tymoshenko. Do they really think that money and the belt does not smell? pic.twitter.com/X7v1IlaBTZ

The press service of the Kyiv city organization of Bo “Batkivshchyna” was surprised by the accusations because the conduct of such shares is not the first year.

“We have transferred the cakes to the East for the Volunteers. It was also sanctification. This year also was consecrated and handed over to the East. In Kiev we also distribute cakes to needy people of Kiev. Last year was the same logos. As everyone puts the signature, and we determine, take responsibility,” – said the press Secretary of the capital of the “Fatherland” angelina Ahilova.

Videots.Week learned how to combine the traditional Easter with the fashionable cooking

To keep pace with the fashion, the journalists visited torestoration Tatjana Jurkovic. She was born in the Carpathian mountains, where in the same yard and got on mysticism and Christianity. Especially for TSN.Tyzhden Tatiana conjured a prescription where successfully combined the secrets of her grandmother and trendy cooking.