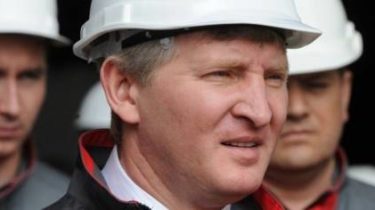 The dispute regarding the debt for “Ukrtelecom” continues.

The lawyers of the holding company of Rinat Akhmetov failed to persuade the arbitrators in the Netherlands to unfreeze andassets of the company totaling more than 820 million dollars. According to the decision of the court of 5 April, which is in the possession of DW, the assets remain blocked.

Akhmetov has entered a crucial battle for the “Ukrtelecom”, which tries to return to partner Firtash – DW

The prohibition to sell or transfer assets effective from December last year, according to the decisions of the courts in the Netherlands and in Cyprus, where the company was holding. As reported in its press release, SCM, freezing does not affect the operations of the holding. Company richest man said he will continue to challenge the freeze in court.

Akhmetov’s assets were frozen at the suit of the company Raga Establishment, for which there is Denis Gorbunenko, business partner and friend, billionaire Dmytro Firtash. Akhmetov did not pay for bought them in 2013 Raga “Ukrtelecom”. Of the agreed amount to 860 million dollars SKM only paid 100 and stopped paying shortly after Firtash was arrested in Vienna on a warrant of the United States.

Dmitry Firtash in a dispute with Akhmetov for the debts is the interest of $ 300 million – a sum he held Raga Establishment for the purchase of “Ukrtelecom”, and after the resale of the company Akhmetov, the money is still not received.

To return to the company instead of money

The holding company of Rinat Akhmetov tries in the International arbitration court in London to return the “Ukrtelecom” company Dmitry Gorbunenko, having paid back $ 100 million. In Raga call it unacceptable, as the cost of the monopolist of fixed communications in recent years have dropped significantly, and assets largely withdrawn to other structures. Finally, the question of debts of Rinat Akhmetov will be decided on April 23, when the international arbitration court in London will consider an appeal in the case. In the nearest future we expect the decision of the court of Cyprus on appeal SCM on the freezing of assets.