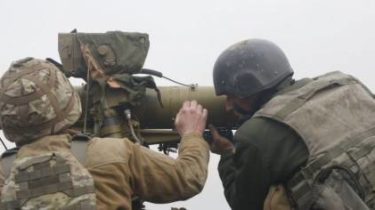 During Friday, the militants fired 16 times the position of the APU.

April 6 in the area of ATO in the Donbas the militants fired 16 times of the Minsk agreements prohibited weapons on positions of the Ukrainian army.

“In the first half of the day mode “Easter truce” Russian militants and the occupation forces are not adhered to. As of 18:00 recorded 16 attacks on Ukrainian positions using the Minsk agreements prohibited weapons. As a result of enemy fire two Ukrainian defender was injured. Injured soldiers are quickly taken to hospitals and they were given medical help,” reads the summary of the press center of staff ATO.

On Donetsk the direction from grenade launchers and small arms, the militants opened fire on Ukrainian positions near Avdeevka and Water, and from large-caliber machine guns and small arms – near Marinka. Also from small arms fired at the defenders of Krasnogorovka, Lebedinsky and double-Pavlopol, and sniper fire was near Shyrokine.