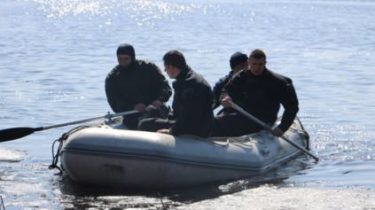 In Kiev, near Zhukov island capsized boat with three men that disappeared.

This was reported in the capital of GU gschs of Ukraine.

“April 8 at 22:40 in quickly-the coordination center has received information that the two men are on the island of Zhukov and need help”, – stated in the message.

As it turned out, the company of five men tried to swim across to the island – the two reached the island, and the rest turned over on the boat.

“Rescuers using aerolister brought two people to the shore. 9 APR divers have begun a search operation for 3 men, which capsized the boat”, – said in SSES.

According to rescuers, as of 17:00 was surveyed 4 thousand square meters of water area of the Dnieper river near the island of Zhukov. Now search works are continuing.

In turn on the page dtp.kiev.ua in Facebook clarifies that a boat recently found on the bottom of the river, people continue to look.