64 fire fighters, including from tanks, and five injured Ukrainian military. Chronicle of the ATO 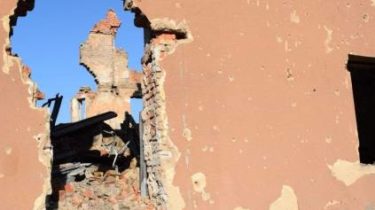 64 fire fighters, including from tanks, and five injured Ukrainian military. Chronicle of the ATO

Most of the attacks occurred in the Donetsk region.

For Tuesday, April 10, in the area of ATO in the Donbas the militants 64 times opened fire at positions of the Ukrainian army.

“As a result of enemy fire, four Ukrainian soldiers were injured and one soldier received a combat injury. Injured defenders promptly taken to hospitals and they were given necessary medical aid,” reads the summary of the press center of staff ATO.

In the direction of Donetsk under fire from the forbidden 120-mm mortar shells hit Ukrainian fortifications near Berdyansk, Lebedinsky, Szerokiego, Water, Sand, Heater, of the Town and the mine Butovka. Also near the Water, Sand and Heater militants fired from tanks, and in the area of the Sands, Talakovki, Lebedinsky and the mine Butovka – mortars caliber 82 mm Grenade launchers of various systems, heavy machine guns and small arms militants shelled the defenders Lebedinsky, Avdeevka, Starohnativka, Talakovki, Marinka, Heater, Gotovogo, Krasnogorovka, the Water, the mine Butovka, Experienced, Novotroitsk and Pavlopol, BMP weapons – defenders of the Sands, Gotovogo and Krasnogorovka, and near Shirokino anti – tank missile system.

On Lugansk the direction from 82-mm mortars, grenade launchers, heavy machine guns, the militants fired at the Ukrainian fortifications near Novoaleksandrovka and armament of the BMP – applied in the area of Lugansk.