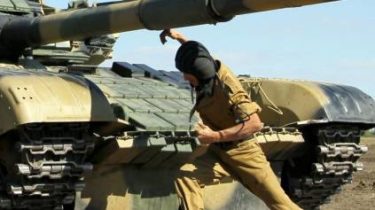 Observers Special monitoring mission of the OSCE has documented 38 units of armored vehicles at the airport in the occupied Lugansk, indicating the continued lengthening of the Pro-Russian militants fighting potential.

It is reported on his page in Facebook press-center of staff ATO.

“In the South-Eastern part of Lugansk (near the airport), fighters of armed forces of the Russian Federation concentrated 7 units of T-72 tanks, 7 reactive systems of volley fire BM-21 “Grad”, 7 units of self-propelled howitzers 2S1, 7 anti-aircraft missile systems 9K35 and 10 units of towed howitzers of various modifications. Also Mission recorded at least 14 anti-tank mines in the North-Eastern edge of the settlement Zaichenko”, – stated in the message.

According to the SMM OSCE in the areas of the villages of Bugaevka and Kruglik was seen 40 tanks of various types.

“Close to the waterworks of the village Golubovka and on the Western edge of the settlement Carabas fixed location SAU of various caliber, and in the territory of the agricultural enterprise settlement Notation – tanks of various modifications,” – said in the headquarters.

As noted, the Ukrainian side of the JCCC called this systematic neglect of the leaders of the occupation administration of the Russian Federation of the provisions of the Geneva Convention, international law, and the Minsk agreement on withdrawal of heavy equipment and weapons from the demarcation line of the parties.

“The Ukrainian side of the JCCC once again emphasizes that such actions of the Russian occupation administrations pose a danger to civilians, the full functioning of enterprises and infrastructure of Donbass”, – summed up in Department.

We will remind, earlier fighters once again disrupted the breeding forces in the Village of Lugansk. APU, meanwhile, stressed that they are ready to redeploy forces and resources.