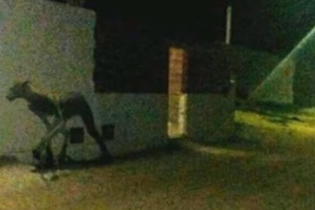 Users voiced a number of options for who it could be.

In Argentina the camera on the street shot an unknown creaturethat resembles a giant dog, which probably killed in the city of Santa Fe two dogs.

The frame, which shows being published on the UFOmania channel on YouTube.

Local residents believe that the creature that looks like a dog, but much larger and with a different physiology of the body, killed a pit bull and a German shepherd. It was after this, as noted, it was recorded by the camera.

The review opinions are divided. One of the users on the Network believes that the residents of Santa Fe are dealing with Aswang – a mythical Filipino monster. This is a man who can turn into a dog-like creature, a bird, even in the car.

Another user told his story clashes with the creature.

“I saw one in VA in 2005, it crossed the bridge, and we went. It wore me out because it looked at us, turned around and started to move like a kangaroo… Hope I’ll never see”, – he wrote.

The review also wrote that the creature may be the creature, because “they look just like this.”