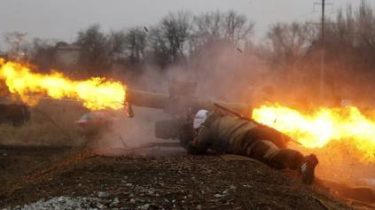 As a result of attacks one Ukrainian soldier was killed.

Militants fired Ukrainian military positions near the village of Lebedinskoe under Mariupol from “Gradov”.

This reports the press center of staff ATO on his page in Facebook.

“Since the beginning of the present day Russian-occupation forces carried out 8 attacks of positions of forces of anti-terrorist operation, again using the weapons banned by the Minsk agreements”, – stated in the message.

According to the headquarters, on Donetsk the direction fighters fired at positions near Lebedinsky of reactive systems of volley fire BM-21 “Grad”.

“The attack began around 6 a.m. and lasted more than an hour. During this time, the invaders fired on Ukrainian positions 40 rockets. It should be noted that the last time the use of enemy MLRS “Grad” at the headquarters of ATO recorded 18-19 December 2017 in the area of Zaytsevy,” – said the military.

Besides it is reported that in the area of Shirokino and Popasnaya mercenaries fired from 122 mm artillery systems, mortars of caliber of 120 mm – the defenders of Novotroitsk, Water and Shyrokine.

“Such actions on the part of the enemy indicate the full interest of the leaders of the occupation administration of the Russian Federation in the further escalation of the conflict and the apparent reluctance to adhere to the Minsk agreements, in particular concerning the withdrawal of heavy equipment and weapons from the contact line of the parties in certain storage areas”, – said the headquarters of ATO.

As a result of shelling, one Ukrainian soldier was killed and another injured. He received the necessary medical assistance.

We will remind, for last days fighters of 35 times fired at positions Armed forces of Ukraine. Two Ukrainian soldiers were injured.