In the Donbass in the shelling of the militants was wounded three Ukrainian soldiers. Chronicle of the ATO 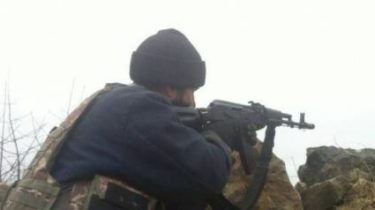 In the Donbass in the shelling of the militants was wounded three Ukrainian soldiers. Chronicle of the ATO

For Monday, April 23, in the area of ATO in the Donbas , the Ukrainian army has counted 25 enemy attacks.

“Since the early days of the Russian occupation troops carried out 25 attacks of positions of forces ATO, using Minsk agreements prohibited weapon. As a result of performing combat missions three Ukrainian defenders was injured. Injured soldiers are quickly taken to hospitals and they were given necessary medical aid,” reads the summary of the press center of staff ATO.

At the direction of Lugansk banned twice from 120-mm mortars and rocket-propelled grenades, the militants opened fire on the Ukrainian fortifications near Trinity, and mortars of caliber of 82 mm – in the area of Popasnaya, three times – under the Novoaleksandrovka. In addition, under fire from rocket-propelled grenades and heavy machine guns were the defenders of Novozvanovka.