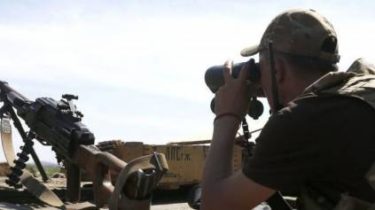 Information about the victims of war with no APU.

For Thursday, April 26, in the area of ATO in the Donbas the militants 21 times opened fire at positions of the Ukrainian army.

“As a result of fighting four Ukrainian defenders was injured. Injured soldiers are brought to medical institutions and they were given necessary medical aid,” reads the summary of the press center of staff ATO.

In Donetsk direction of the Minsk agreements prohibited 120-mm mortars, and APCS, grenade launchers and small arms fighters fired at the defenders of Novotroitsk. From mortars 120-mm and 82-mm fighters fired at Ukrainian strongholds near Lebedinsky, grenade launchers of various systems and small arms repeatedly in the area Avdeevka, Marinka, and Heater. In addition, heavy machine guns, the militants used under Nevel and Talakovka, small arms in the area Lomachenko and Experienced, and near Novomikhailovka – sniper fire was conducted.

On Lugansk the direction from the forbidden 120-mm mortars, heavy machine guns and anti-tank guns, the militants fired at strengthening the Armed forces of Ukraine near Zaytsevy.