During the defense of Ukrainian soldiers killed two militants and wounded three more. Day in the Donbass 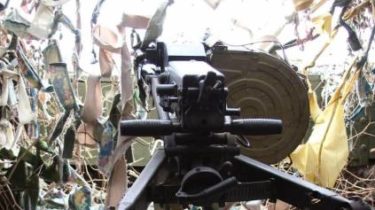 During the defense of Ukrainian soldiers killed two militants and wounded three more. Day in the Donbass

Militants fired 21 times the position of the Armed forces of Ukraine.

In the last days on Donbass fighters of 21 times opened fire at positions of the Ukrainian army. The armed forces shot for the sake of defense in response killed two militants and wounded three more. Losses had no APU.

Gunmen shot Zaitsev from heavy guns, and in Marinka mine fell in the yard of houses

“In the last days, may 3 and night of the current day situation in the area of operations of the combined forces remained difficult. Fighting continued mainly in Donetsk and Svetlodarsk and Mariupol directions. The enemy once again, not observing the Minsk agreements, tried to weaken the defence of our units. For the past day 21 times, and the night of 4 may, 3 times the Russian-terrorist forces used the internationally banned weapons near the settlements: Svetlodarsk, Lugansk, Trinity, Prichepilovka, Novotoshkovskoye, Russian Federation, Crimean, Kamenka, Talakivka”, – stated in the message.