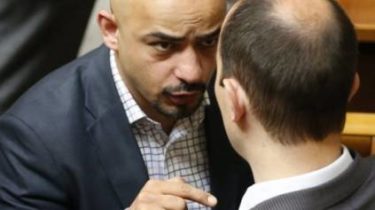 The MP asked the guard as an ordinary citizen.

Mustafa Nayem reported that a number of prosecutors Shevchenko district of Kiev are in close friendly relations with Azerbaijan fled to the suspect in the beating of the MP.

He wrote in his Facebook that the case 100% wanted to “merge”. “One (the Prosecutor) is a relative of them (suspects) business partner, and the second – after received at the hands of our business – met with the relatives of the fugitive. Why prosecutors have not declared an existing conflict of interest and did not recuse himself, I think, needs to understand the qualification and disciplinary Commission of prosecutors, where we will see”, – the politician noted.

At the moment busy with the Kiev Prosecutor’s office.

While Nye said that in the last five days on his official email on behalf of different organizations regularly receive letters with the requirement to take a statement. “I’m not going to repeat here the threats to myself and my family; to promptly determine exactly from whom they come, impossible. Of course, we transmit all these materials to the investigation, but just in case, my lawyers and relatives insisted to seek state protection, which was provided by the national police. By the way, for the guard asked , not as a Deputy, but as an ordinary citizen in accordance with article 129 of the Criminal code,” he said.

The politician said that he still feels pain after the attack. “It was a million plans that I will definitely be back, but so far to read and write a little painful, mouth – tractor, and a smile to frighten children,” wrote Mustafa Nayem.

We will remind, the conflict occurred around 17:30 Monday, April 30, near the Bessarabsky market in downtown Kiev. Nye was moving by car in the direction of Bessarabska square. On the road it cut “Mercedes”, began to quarrel. At this moment they drove the BMW car. During the conflict one of the strangers punched the Deputy in the jaw. Three were detained.

Wednesday, may 2, the court chose one of the detainees, Mohammed Sitovo – a measure of restraint in the form of a round-the-clock house arrest. He said in court that “nobody wanted a fight”.