Spend the night in the Ukrainian capital city will not be easy.

Numbers 18 thousand hryvnia per day for guests of the final of the UEFA Champions League was the Dorm rooms of sports facilities, the Director is unaware of the fact that housing for rent, for fans. To get to the hotel called “Slavutich on the water” comes through the wild thickets, in some places the road is covered with broken bricks, said in the story TSN.19:30.

Institution impressed the Internet with beautiful photos, promises to provide a private beach and free Wi-Fi. On the night of the final match of the prestigious football tournament the price of the rooms were the lowest in Kiev, from 18 to 24 thousand hryvnias. However, in the first place the existence of the hotel just denied it, but after half an hour managed to communicate with the Director of sports facilities. “I didn’t put. I know who could do this,” says Anatoly Maistrenko and call someone from the friends to figure out this question.

Videoton continued RAID on the capital’s hotels, which set sky-high prices on the day of the Champions League final

Today, TSN went to a cheap hotel for fans. And was struck twice. First, the fact that numbers 18 thousand hryvnias were Dorm rooms sports facilities. Subsequently, the fact that the hotel Director was unaware that the hostel rent. 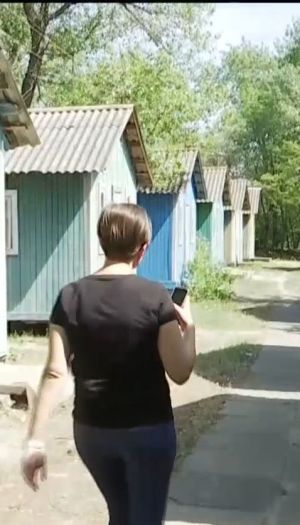 The man explained that a year and a half ago, asked a friend to help find the occupants of this dormitory for the period between sports fees and to post information on the Internet, but the business plan failed, because the island has no water from the taps in the rooms smells bad, the guests complained and ran away. “We sold 350 of these rooms, and no one was there,” he says. Maistrenko linked journalists with this clever helper which is placed on the numbers – Valentine found on other recreation facility 40 km from city. There were sold 100 thousand and the owner is convinced that you are no longer available. The question of “Slavutich on the water” he does not like. “I don’t see anything in this. Opening the economy, look: is there a demand? Demand creates supply,” he explains his vision and the high cost of rooms.

According to him, expensive housing, remove people from the UK, Sweden, USA. About the living conditions on the basis of “Slavutich”, the original Valentine responds: “I think they will be comfortable there because there are places even worse.” But Anatoly Maistrenko information about what all places to its base sold for at least $ 600 per night, sees with horror. “It’s a shame of the country and a disgrace to our database if they begin to wash and smell this” – he admits. According to the head comes the idea that the people of Kiev offer to fans to stay in their home free of charge. “Could even be free. We were even better. We will not take the money. Not the same as”, – says the head of the institution.