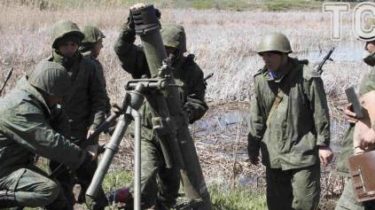 For the past day, Sunday, may 13, the situation in the area of operations of the combined forces remained difficult. Hostilities did not cease along the entire line of contact.

About it reported in a press-the centre of Operations of the joint forces.

According to the CEO, the fighting does not stop in the area of Avdeyevka and industrial area of the settlement Peski and Mariupol direction in the areas of settlements talakivka, Water and Shirokino.

In the past days, mercenaries, ignoring international agreements, 63 times violated the ceasefire, including 20 times used mortars and artillery. Foreign troops were active in the defense and gave an adequate response.

During the fighting yesterday two of our defenders got fragmental wounds. Now the wounded received medical treatment in the hospital. For the current day, may 14, no losses.

Recall that on 14 may at Donbass is going to come , the special envoy of the US state Department in the Affairs Kurt Volker, to see firsthand the humanitarian crisis. According to media reports, Walker has continued and expanded the mandate.

The last time Kurt Volker was in Ukraine in January this year. He held several meetings, particularly with Ukrainian President Petro Poroshenko and the Secretary of the NSDC Oleksandr Turchynov.