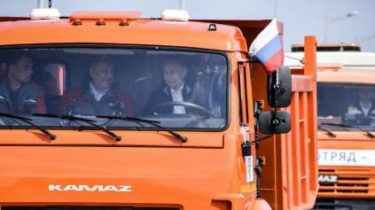 Putin was driving not wearing a seat belt with the two men.

The President of Russia Vladimir Putin on may 15 opened the Kerch bridgethat should connect the occupied Crimea and Russia.

Putin got behind the wheel of KAMAZ and led the convoy of more than three dozen cars. He was wearing a seat belt and the cab of the truck with him were two other men.

This view amused users of social networks, which invented a lot of photoshopped pics and jokes about it.

Putin arrived at the opening of the bridge across the Kerch Strait. The head of state controls the KAMAZ. pic.twitter.com/Hp0IR11983

Uh, and where Putin the right to drive the truck?

I have one raised the question of why Putin and the two FSO-schnick not to wear? #Kristinast pic.twitter.com/1ULaNpiHOd

somebody fine the President for driving without wearing a seatbelt.. #Crimea #Kerch #Bridge

– Today is notable for the fact that today we have seen Putin in that chair, which is designed specifically for him, based on the results of his 18 year reign.

Alas, the story finally showed us that neither the cook nor the truck driver is not fit for government. pic.twitter.com/GrcasxAziP

– Vladimir Vladimirovich, why are you so sad?
– the bridge was built..
– Rejoice need..
Yeah. now to return the Crimea to Ukraine and another with the bridge.. pic.twitter.com/Ra9IFISHBg