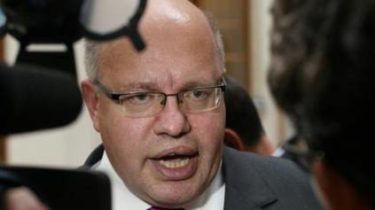 He came from Kiev and the next day flies back to the same Minister – the Minister of Economics of Germany Peter Altmaier. The purpose of his “Shuttle diplomacy” is a compromise, by which the Ukrainian resistance to the construction of the pipeline “Nord stream-2” could if not overcome, then at least lower a little. Ukrainians fear that after the completion of the gas pipeline will pump gas to the EU only to them – that is, bypassing Ukraine. Thus, Kiev will lose billions of dollars of income from the transit of “blue fuel”.

The idea of Altmaier is to provide the Ukrainian side guarantees that gas will be supplied, in particular, and through its territory. The only question is, during what period and to what extent. And also: who will provide the appropriate safeguards Kiev – Russia or the EU? All this is the content of the talks, which Altmaier does not disclose. At the same time, he convincingly argues that the setting is “very optimistic”.

Time is running out

The fact that Americans very much want to get on the European gas market, only complicates the negotiations. After all, the German economy Minister is convinced “transalantic”. He constantly stresses the value of unity with the United States, “regardless of who rules in the EU or USA”. Indirect criticism of the American President Donald trump?

The administration’s latest threatens, both friends and enemies increase import duties on some products. And never thinks anything good about the “Nord stream-2” – guided by selfish interests. After all, Washington would gladly exported is obtained by the controversial method of fracking gas in skreplennoe form in Europe and thus pushed Gazprom out of the market. Two corresponding terminal for making such a gas is already working in Europe – one in Poland and one in the Netherlands. Several more are under construction.

However, as if the Americans didn’t try to scroll – to compete with Russian prices, they can not. And this is the reason why the German government supports the construction of the gas pipeline “Nord stream-2” from Russia directly to Germany. But meanwhile the time is running out. On Friday, Chancellor Angela Merkel will meet in Sochi with Russian President Vladimir Putin. In addition to the themes of the pipeline, we will discuss the situation in Iran and Syria. With regard to the Iranian agreement, Russia, China and the EU are working here in a joint direction. They want to ensure the continued functioning of the agreement in the future, especially given the recent release of her the United States.

“A lot of things that does not fall under sanctions”

It seems that Germany and Russia closer together in terms of bilateral relations, saying in diplomatic circles. And though the change to current sanctions against Moscow no one yet nothing is going, says the economy Minister of Germany, Altmaier in conversation with DW, but “below the line”, they say, perhaps more closely. The German government wants to promote cooperation between SMEs of both countries. Berlin does not exclude the possibility to support Russia in the issue of training and improving the skills of local managers. Do not rule out in the German government and the help of Russia to adhere to high environmental standards in mining. “There is still a lot of things that does not fall under sanctions,” – said the Minister in an interview with DW.

Putin will not speak with Merkel and Macron sanctions

Altmaier agreed with the Russian Prime Minister Dmitry Medvedev in June there will be a meeting of the working group, the delegations of the German Ministry of economy and relevant Russian counterparts. Touched in Moscow, the German Minister and themes of legal guarantees for German businesses in Russia is an important base for further investment from Germany into the Russian market. In the end, says Altmaier, is the economic and political goal of the German government – run “dynamism” of the economy of Eastern Europe. They say, more growth from Russia, Ukraine and other countries of the region in the end will provide the prize, including, and Germany.