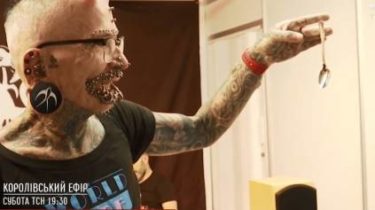 Drawings on the body this year can be done blindly – free.

In the capital started the festival of tattoos, which makes the tattoo and show you the most successful figures. Kiev residents asked to paint as fabulous images and very real characters, says the story TSN.19:30.

Festival tattoo will last for three days. The organizers promise thousands more new cool drawings on the body. “First and foremost, it is art. For the master I – as a canvas” – says Konstantin, who came for the picture on his leg. The master did not hide the fact that the procedure is long and painful, but otherwise not. “Neither myself nor the friends do not regret,” – says one of the creators of tattoos. Next to the fourth hour of suffering for the sake of Igor’s skull with the chess on the calf, but Vladimir wants to have on his leg photo wife Tatiana. “They say that in life you I live on the neck, you’ll know the place,” he jokes.

Video settings in Kiev started the festival tattoo, where you can make free drawing on the body

Drawings on the body can be done blindly – free, however, depicted as willing prostitutes and ships. Characters with unique tattoos and piercings have seen the reporter. For the brave there is a kind of lottery: put my hand in the window and wait to see what you’ll fill. Master knocks out an anonymous client of a prostitute, and the question, whether happens then claims, recognizes that communication with the media in his drawings he is. “We leave through the back entrance, that they have not seen,” he said.

Emma Watson was surprised by the tattoo bug

Most attention at the festival went to the man in Korenica shorts and top, he 481 piercings. 58-year-old Rolf says that iron is not stopping him even though inserted into the fingers magnets. Translator Valeria talks about the horns of his ward – he had acquired them gradually.

As practice shows, not all tattoos are good, so the festival is removed. Most often clients want to get rid of the mistakes of youth, a tattoo while serving in the army or being in prison, just poor quality pictures. “It’s some kind of cat. Wanted Jaguar, but it turned out a mixture of a bulldog with a rhinoceros. And place unsuccessful,” explains Anastasia. Masters are reminded that to score the body to the mind, because to make a tattoo at least five times more expensive, and the procedure is much longer.