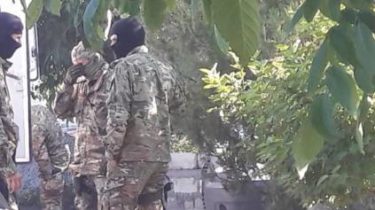 Official Kiev has condemned the searches and detention of the Crimean Tatars in Russia-occupied Crimea. In Bakhchisarai and on its outskirts is still the morning of 21 may, the Russian security forces in balaclavas came to the two Crimean Tatar activists. Server Mustafaev and Edem Smailov are the coordinators of the organization “Crimean solidarity”, which, in particular, monitoring the rights of people in the occupied by Russia Peninsula.

The courtyard Mustafayev employees of the FSB drove the police van and in the house of Kazakh, Russian security forces blocked three children and not let them mother. This is stated in the story TSN. Immediately to the homes of activists started coming neighbors of detainees with the requirement to explain the reason for the searches. Russian security forces silently evacuated detainees from their homes.

Later the FSB said that activists suspected of involvement in the organization “Hizb ut-Tahrir” is a religious movement, recognized worldwide. However, in Russia the organization is called terrorist.

“Detention Mustafayev and Smailova once again confirmed that the Russian anti-terrorist legislation widely applied in occupied to the Crimea to cover up political repression against representatives of the Crimean Tatar people. Urge the international community to condemn this vicious practice, which, along with Russian-supported terrorists in the Donbass, shows the true value of the statements of the Kremlin about “Russian contribution” to the international fight against terrorism. Expect our international partners to strengthen political and diplomatic pressure on the state-aggressor to help release the illegally detained Russian citizens of Ukraine”, – reads the statement of the foreign Ministry.

The Ministry also demanded that Russia “immediately stop politically motivated persecution of representatives of the Crimean Tatar people, to release Mustafayev, Smailova and all other illegally detained Ukrainian citizens. The Russian Federation should fully implement the resolutions of the UN General Assembly “Territorial integrity of Ukraine” of 27 March 2014, “the Situation with human rights in the Autonomous Republic of Crimea and Sevastopol (Ukraine)” of 19 December 2016 19 December 2017, and the order of the International court of justice in relation to measures under the claim of Ukraine against the Russian Federation concerning application of the International Convention on the elimination of all forms of racial discrimination”.

“In both cases, the searches ended with the arrest and transportation to the Crimean Department of the FSB of the Russian Federation. Advocates reported from the Crimea and the occupation of the Crimean media Server Mustafayev and Eden Smailova charged with participating in terrorist organizations, provided that the infamous part 2 of article 205.5 of the Criminal Code of the Russian Federation”, – said Chubarov.

He also mentioned that “today , the FSB announced the “revelations” and other “extremist organization”, allegedly organized by the Crimean Tatars. According to the public relations Center of the FSB of Russia, Erol Valiyev, assistant of people’s Deputy Mustafa Dzhemilev, together with accomplices committed the attempted arson of the building of the Crimean collaborator, the former mufti of Crimea Emirali ablaeva. In the video, which should, according to the intention of the FSB to serve as evidence, shows the Kharkiv Alexander Steshenko, who on April 11 of this year were lost during the crossing of administrative border with the occupied Crimea. As it became known later, he was arrested by the FSB. According to our reliable information, he was subjected to torture. In its announcement, the FSB emphasizes that this extremist organization “acted on the instructions of the Chairman of the Majlis of the Crimean Tatar people”.

Chubarov notes that “as in the situation with bahchisaraiskiy activists, and the announcement of the “opening” of attempted arson, trace the main characteristic of the occupying Russian authorities are trying to cover up the repression of the Crimean Tatar people the label “terrorism and extremism”.

“The arrest of the Server Mustafayev, Edem Smailov join the list of shameful persecution of activists, community journalists who consistently stand on the protection of human rights in the occupied Peninsula. At the same time the attempt by the FSB to combine not possible, they organized the burning of the house of the mufti with the Mejlis of the Crimean Tatar people, adds to the list of failed attempts to discredit the Majlis of the Crimean Tatar people”, – said Chubarov.

He condemns the arrest of activists, calls on Ukraine and the world for the strong reaction against Russia for the sake of preventing the persecution of social activists in the occupied Crimea.

Server Mustafaev and Edem Smailov – coordinators organization “Crimean solidarity”. The courtyard Mustafayev employees of the FSB drove the police van and in the house Smailov said Russian security forces have blocked 3 of his children and not let them mother. Security forces silently evacuated the detainees from their homes. 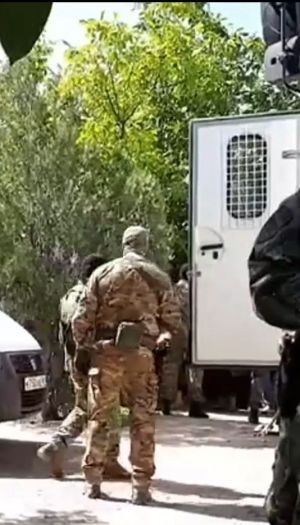 TSN.ua
,
The Ministry of foreign Affairs of Ukraine
,
Refat Chubarov/Facebook