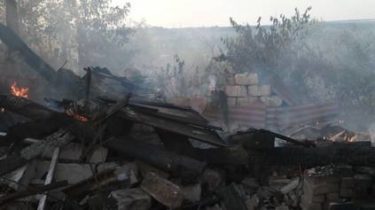 The attack an act of terrorism.

About it reported in Department of communications of the police in Donetsk region.

“A resident of the village of zaytsevo was wounded during the shelling by militants yesterday, may 21, at around 21.00. The woman was in their own backyard”, – stated in the message.

Now the victim is in the hospital of the city of Bakhmut with mine-blast injuries and shrapnel wounds.

Upon incident the criminal proceedings under article 258 of the Criminal code of Ukraine (terrorist act). In the place of police work.

We will remind, during attacks of militants in Marinka killed a civilian man. He went out on his yard on the outskirts of Marinka, at a time when the militants fired on the city with small arms. One of the bullets went straight into a civilian.