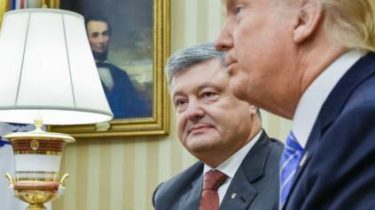 The presidential administration threatens to sue authors of the material.

In the Administration of the President of Ukraine called the fake information in the article the BBC that the meeting of the presidents of the United States Donald trump and Ukraine Petro Poroshenko in June 2017 was arranged for big money.

“Outright lies, slander and fake. So we appreciate the misinformation about the alleged meeting between the presidents of Ukraine and the USA were organised for the money,” – said in a statement to the AP.

The Administration noted that the meeting was organized exclusively by diplomatic means, in particular, with the assistance of the Embassy of Ukraine in the United States.

“Spread blatant misinformation is part of a fake campaign for discredit of the Ukrainian-American relations and a personal attack on the presidents of Ukraine and the USA. Because in the process of preparation of this material was ignored the comment about the unreliability of this information, we require refutation. If this does not happen, we reserve the right to file a lawsuit,” noted the AP.

Recall that in the investigation of the air force, citing sources, talking about that first meeting Poroshenko and the tramp was planned to be short. Kiev wanted more time to negotiate. Therefore, they say, hooked up informal channels – came to the trump lawyer Michael Cohen, who for their assistance in conducting extended negotiations allegedly received from 400 thousand to 600 thousand dollars.