The German foreign Minister arrived in the East of Ukraine 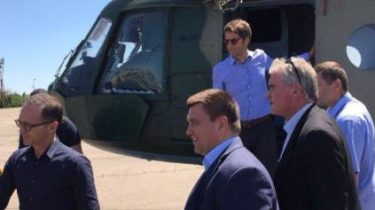 The German foreign Minister arrived in the East of Ukraine

He arrived with Paul Klimkin.

The foreign Ministers of Germany and Ukraine Haiko Maas and Pavlo Klimkin arrived in Mariupol.

Klimkin said that they plan to meet with the OSCE observers and the local population. Then the Ministers will go to the demarcation line.

Profit with the Minister of foreign Affairs of Germany Haiko Maas to Mariupol. We will meet with the OSCE observers, the local population and drive to the demarcation line. pic.twitter.com/LRVD9smIvG

We will remind, Haiko Maas promised to make efforts to end the conflict in Ukraine. He stated that to put up with the annexation of Crimea and aggression against Ukraine is impossible.