Truck in Kiev knocked down two people on a pedestrian crossing 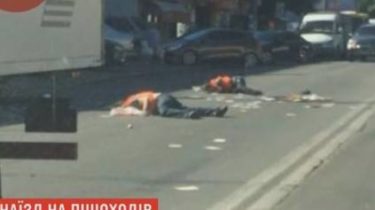 Truck in Kiev knocked down two people on a pedestrian crossing

Zebra on the road hardly noticeable.

Two people on a pedestrian crossing in the capital was hit by a truck. It happened a few hours ago, says TSN.12.00.

Workers in orange vests, probably the local housing office, crossed the road near market near metro station Nivki. Why the driver did not notice them and did not slow down, the police still can not say. On the site now investigative actions proceed.

The victims were taken to the hospital. Witnesses say one person was conscious and even tried to rise. The other lost a lot of blood.

Passers-by insist on this crosswalk accidents occur almost weekly. Drivers don’t watch for the signs, and Zebra on the road for a long time sterlas.