Klitschko calmed down and called the year, the Metro bridge will fall 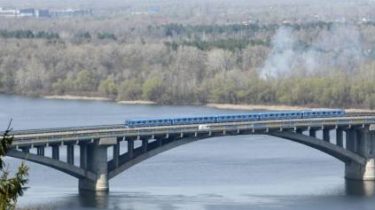 Klitschko calmed down and called the year, the Metro bridge will fall

City officials say that the overhaul will have time to do.

Panic on the Metro bridge should not be, the Deputy Chairman of the KSCA Dmitry Davtyan in response to interview co-author of the project of the bridge George Sosnovskogo.

“Prior to accident 6 years from the time of the survey. That is, theoretically we should have time to do a complete overhaul until 2022,” – said the Deputy Klitschko in Facebook.

In Kiev, the reconstruction will block the Shulyavska overpass. Options of a detour in the infographic

“Then you can start the repair. The construction period – 2 years”, – he wrote.

In Kiev in the middle of the day hit another overpass.

There are four categories of technical state of the building. It is the fourth category means that the design is unsuitable and dangerous for exploitation, and is characterized by the exhaustion of the bearing capacity and the danger of collapse.

We will remind, the co-author of the project of the bridge George Rosnowski convinced that the Metro bridge in Kyiv could collapse at any moment. “This bridge will stand for 100 years if to follow him. But he’s already 30 years old began to raise concerns. The survey found that there are a lot of cracks, and the fittings are in poor condition”, – he told in interview “to Gromadsky radio”.