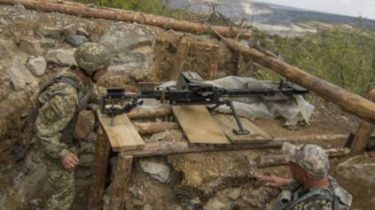 For Tuesday, June 5, in the Donbas the militants fired 31 times Ukrainian position. During the fighting three soldiers were injured and were hospitalized. 6 June, the situation has not changed significantly.

“The situation remains complicated and controlled. In some areas and continued intense fighting. Tense situation remains in the areas of settlements Prichepilovka, krymske, Novotoshkivske, at the direction of Lugansk, Experienced and Novotroitskoe in the direction of Donetsk, where the Russian occupation troops 11 times used Minsk agreements prohibited mortars of 120-and 82-caliber. Not stop the fighting with small arms in the area of human settlements Lebedinskoye and Shirokino near Mariupol”, – stated in the summary of the press center of the joint forces.

Thanks to active defense fighters are unable to move the positions of the Ukrainian army.

The militants have also stepped up reconnaissance drones.

“Invaders intensified efforts in the exploration with the use of drones. So, on the morning of June 5, units of radio-technical troops from the combined forces timely detected and identified the aerial target, which was a Russian UAV “Orlan-10″ and the duty units of antiaircraft missile troops destroyed the purpose of on the approach to the area, which interested of the enemy,” – said the press center.

We will remind, in the Donetsk region police exposed two accomplices of the terrorists.