Fines and corrective work. The reporters found that the flower is threatened by vandals 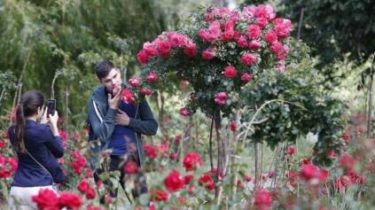 Fines and corrective work. The reporters found that the flower is threatened by vandals

If stealing colors is not more than 176 hryvnia is an administrative responsibility.

In the capital, vandals cause damage to flower beds on more than one million hryvnias.

Have a pensioner who comes in the middle of the day and tears rose in the Dnipro district of the capital, said in the story “Sedanca z 1+1“. The woman was detained by the police. However, serious punishment she will not suffer. Most plants utilities grow themselves, so they cost less than in stores.

If stealing colors is not more than 176 hryvnia is an administrative responsibility. Accordingly, it is a fine of up to 510 hryvnia or up to one month of correctional labor.

A second offense is punishable by a fine of up to 850 UAH, or correctional labor up to two months.

In Kiev, the vandals stole a unique bust of Lesja Ukrainka from the facade of the Museum of the poet

If the damage exceeds 176 hryvnia – criminal liability. Depending on the circumstances, the sentence ranges from a fine of up to 1700 UAH, or imprisonment of up to three years. However, for the flowers with flower beds to give such a verdict will be decided not by each judge.

“Statistics of thefts is increasing every year. In Victory Park 60 thousand colors. For the year gradute approximately one thousand. If we talk about roses, they were planted there two thousand. Last year stole around 240 pieces. For this and introduced security,” says Eugene Kovtun, Director of the CP content of green plantings.

In General, in Kiev last year, the thieves embezzled more than 30 thousand flowers. And even one hundred and fifty trees and over two and a half thousand bushes.

In Lviv, the vandals cut off the head of the monument to Shevchenko

Earlier it was reported that in Kiev sculptors restore vandals desecrated art composition “the Kids, let them boats“. Little Kiy, Schek and Horeb, got back their favorite ships and a good chunk ripped out of the “meat” of the map of the capital. A third of the Kiev – brass plates with images of Podol, Obolon and Troyeshchyna – along with the boats stole two drug addicts and sold for scrap. The vandals are caught and put behind bars, and the sculpture restored.