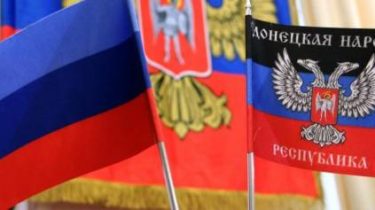 They immediately killed and injured in a mortar attack.

On the morning of 7 June in the village Golubovska, which is under the control of fighters of “LNR”, the explosion occurred near a bus, injuring civilians. The militants have accused the Ukrainian army mortar shelling.

Avakov told about the possibility of Amnesty for militants

“Today, June 7 around 10:30, the invaders have committed another crime in the village Golubovska that in the Luhansk region in the temporarily occupied territory against the civilian population. In a residential area of the village, the terrorists detonated an explosive device which affected local residents. Russian occupants resort to such crimes against the civilian population with the aim of discrediting the United forces and intimidation of citizens”, – stated in the message.

The Russian occupation troops once again resorted to provocations and attacks against the civilian population. Today, June 7…

In turn, the media militants publish the statement of the leader “LNR” Leonid beekeeper who had killed and injured in a mortar attack of the settlement. According to him, the explosion occurred near the bus, resulting in injuring 6 people.

For the past day, June 6, fighters of 25 times fired at the Ukrainian positions. The shelling killed two soldiers of the APU, and another two were injured.

Two Ukrainian soldiers were killed and two were injured. Fighters from mortars fired at positions on the sea of Azov. Last night, too, with the mortars hit in Luhansk and the Crimean Novorossiyskogo. In this battle, losses among the soldiers of the APU is not.