Six parties overcome the entrance barrier to the Parliament – poll 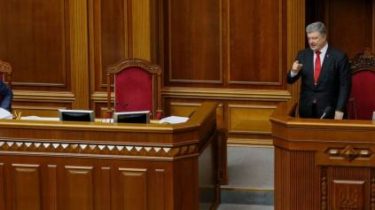 Six parties overcome the entrance barrier to the Parliament – poll

Tymoshenko, Poroshenko and Zelensky – the leaders of the rating to the Verkhovna Rada.

The Verkhovna Rada of the new convocation will have the chance to go six political parties.

This is stated in the results of the may survey of the SOCIS sociological group that was released Thursday, June 7.

If parliamentary elections were held soon, then the Parliament could get the “Batkivshchyna” (leader Yulia Tymoshenko) – 9.7% of the “Block of Petro Poroshenko “Solidarity”- 8,8 %, the party “servant of the people” (actor Vladimir Zelensky) of 7.2%.

When choosing political forces of the Ukrainian citizens have less focus on the faces and names of its leaders (there are only 25.6 per cent).

For 54,2% important real cause of the party, to 39.5 per cent – ideological platform (the party program).

“The Ukrainians are still difficult to understand the difference between social Democrats and national Democrats. But the population is more balanced political orientation. The ultra-left and ultra-right underground,” – said the Executive Director of the center SOCIS Alexander Stegniy.

The survey was conducted from 11 to 22 may in all regions of Ukraine except Crimea and occupied territories of Donetsk and Lugansk regions. We surveyed a total of 3 thousand people. Sampling error does not exceed 2%.

Informed by results of sociological polling group “Rating”, it became known that in case of holding early parliamentary elections to Verkhovna Rada of Ukraine will host seven parties, and most seats will get the “Fatherland.” Party Zelensky “servant of the people” will not overcome the 5% barrier.