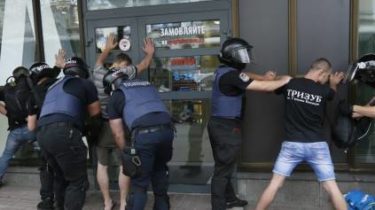 The actions of the police against nationalists he considers reasonable.

The head of the National police of Ukraine Sergey Knyazev said that during the”Equality March” gross violations of public order were not.

He said this during a briefing on 17 June, the press service of the Channel.

“This flame will burn not only the LGBT flag”. The police burned the symbol of the “Equality March”

According to him, during the procession, the police did not detain anyone.

“Was not detained and there were no rough violations of public order in General,” – said Knyazev.

According to the Deputy Chairman of the National police of Ukraine, head of the police of Kiev Andrey Krishchenko, due to clashes before the rally opponents of the “March of Equality” was made administrative materials.

He also added that given that the police were prepared with tear gas and blast packages, the actions of the police to arrest opponents of the March “were quite reasonable”.

17 June, a group of 150 opponents of the “Equality March” blocked the road route participants. Police pushed them to avoid provocations. Nationalists and representatives of religious communities , there were two clashes with the police. In eRDR were made on the two articles of the Criminal code: article 342 (Resistance to the employee of law enforcement body) and article 345 (Threat or violence concerning the employee of law enforcement body).

After the clashes, the nationalists had blocked several streets in Kiev near the office of the police demanding the release of detainees. Now all the protesters released.