The special operation law enforcement officers. In Kiev, the police staged a large-scale detention of opponents of equality March 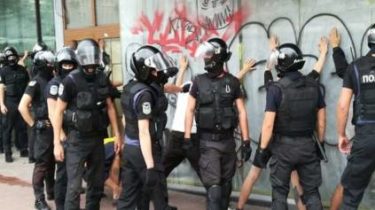 The special operation law enforcement officers. In Kiev, the police staged a large-scale detention of opponents of equality March

The operation removed from the height of bird flight.

A month before the holding of the equality March in Kiev, various radical organizations have threatened to disrupt the procession of the LGBT community and get its members. Today in the morning more than a hundred people – so did the police blocked the route of the upcoming March. Armed and ready. The police went on the offensive. In the center of Kiev turned almost fighting. Detained 57 people, injured five police officers. And that was not krivotolkov, police have released video. And the movie was so revealing.

Unique footage of the entire RAID from a bird’s flight. Such a clear picture of the work of the police, it seemed, was not. An incredible number of police buses and police.

Protesters have surrounded and as the nest from all sides began to push. The footage clearly shows that could use against participants of the Pride. The police throw stones, sprayed with tear gas. What to get a mirror response.

Literally within seconds the riot police squeeze about a hundred radicals in single file and they are all blocked.

A man in civilian clearly controls where and how many people to put and where to send. Near the bright form are paramedics with first aid kits for emergency assistance.

Then begins the second stage – police creates a corridor and one by one pulls out and squeezes past the perimeter security. Some leave, others are still trying to take revenge.

Again you can see the scuffle, gas, pinkie here already on the other side to help hurry nashvegas and still finish off the robbers. Start of detention.

57 young people being loaded into paddy wagons. Some needed help. Others pushed over the sides of the March. Among law enforcement agencies – five of the victims.

Coordinated the special operation lasted only six minutes. The passage of the equality March at seven in the morning was again free.