“To finish the job in two nights is fine.” Assistant to the President told about the schedule Poroshenko 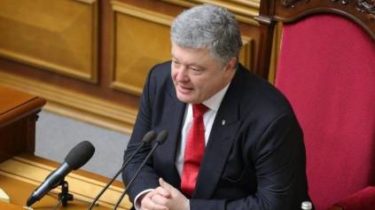 “To finish the job in two nights is fine.” Assistant to the President told about the schedule Poroshenko

According to Yuri Onishchenko, the President has “unique performance”.

The President of Ukraine Petro Poroshenko permanent work schedule is not, on average, working from ten in the morning until one o’clock – said “up” first assistant to the President Yuriy Onishchenko.

“This month, day ten, we finished work at two in the morning. It normally has. Well, Peter’s unique performance. Sometimes we work until four in the morning,” says the assistant.

According to him, the fact that Poroshenko likes to set up a meeting for the evening when everyone is already tired, is the manipulation.

“You are these “partners” please put the meetings in the evening to the afternoon to do other things. They always ask that the meeting was not before eight in the evening. The President precisely such habits there, to meet up later, then to drain. If you listen to everyone who says that was the President, and to make how many hours they allegedly spent, days not enough time” – said Onishchenko.

Earlier it was reported that the journalist Alexander Dubinsky published on its website the information that the President of Ukraine Petro Poroshenko allegedly has a personal profile in Facebook under an assumed name Peter Lions. According to him, for 4.5 years Poroshenko was hiding in a network under a pseudonym. On his page signed by many politicians and businessmen, as well as several of his family members, told reporters.

Also in Facebook supposedly has and wife Poroshenko Marina. Dubinsky asserts that she is hiding behind the name Margarita Zaytseva.