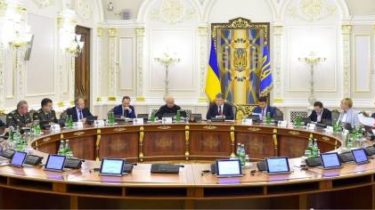 The list has increased to 786 1759 physical and legal entities.

The national security Council and defence of Ukraine enacted an updated list of sanctions.

“At the initiative of the Cabinet of Ministers of Ukraine and the security Service of Ukraine were sanctioned to 30 legal entities and 14 individuals in connection with what has been updated sanctions list, which now consists of 1759 individuals and 786 legal entities”, – stated in the press service of the NSDC.

Sanctions imposed in respect of the Russian military-industrial complex, as well as SE “Lugansk aircraft repair plant”, which is posted on the occupied territory of Ukraine.

Sanctions imposed in respect of individuals involved in the preparation and conduct of illegal voting in the territory temporarily occupied by Russia of the Autonomous Republic of Crimea and Sevastopol within the framework of the elections to the state Duma, and sanctioned by the US government, among which Russian billionaire Arkady Rotenberg and his family members.

NSDC will duplicate the US sanctions against Russia – Turchynov

We will remind, on may 2, the national security Council has imposed sanctions against juridical and physical persons connected with the Russian aggression against Ukraine. Sanctions initiated by the government, SBU and national Bank for three years or indefinitely, in respect of natural and legal persons involved in the Russian aggression against Ukraine, to the preparation and conduct of illegal voting in the occupied Crimea in the framework of presidential elections, representatives of the Russian occupation administration in Crimea, the fighters of the Russian armed forces in the occupied territory of Donetsk and Lugansk regions, and the like. In addition, the sanctions imposed in respect of persons involved in information and cyberagression against Ukraine, illegal actions against its citizens who are illegally held in Russia in respect of deputies of the State Duma and members of Council of Federation of the Federal Assembly of the Russian Federation and so on. May 18, President Petro Poroshenko signed a decree on the extension of sanctions.