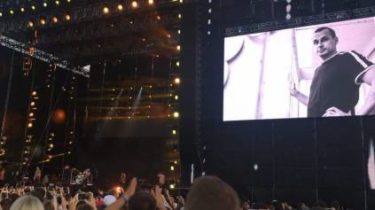 During performances the group on large screens appeared the image of a Ukrainian political prisoner.

At a music festival Atlas Weekend in Kiev during a performance of “Boombox” visitors called for the release of Ukrainian political prisoner Oleg Sentsov.

The correspondent reports about it TsNII from the event.

During the performance, frontman Andrew Khlyvnyuk together with people several times shouted “Free Oleg Sentsov,” and on the screens of the stage, a large picture of the prisoner.

Finally, the leader of the group “Boombox” thanked the visitors for their support of this initiative.

Sister. for the first time in three years, was found with his brother