At the forefront again wounded Ukrainian fighters. The situation in the Donbass 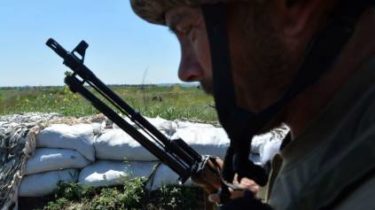 At the forefront again wounded Ukrainian fighters. The situation in the Donbass

In the Donbas during the Sunday, July 8, fighters 21 times fired at the Ukrainian positions.

“The situation in the area of operations of the combined forces remained controlled. Russian occupation forces violated the truce, which was established in almost all the frontline. The enemy fired with grenade launchers, heavy machine guns and small arms”, – stated in the summary of the press center of the joint forces.

At the direction of Lugansk was quiet.

In Gorlovka and Svetlodarsk areas , the militants opened fire on Ukrainian positions in the area South of Svetlodarsk – used grenade launchers, heavy machine guns and small arms. Near the southern one Ukrainian soldier was injured.

In Donetsk and Mariupol the directions in the last day were the most fervent. There are militants from rocket-propelled grenades, heavy machine guns and small weapons 18 times fired at positions of the joint forces. Under fire were the defenders of Avdeevka, Marinka, Water, Shirokino, lebedinskoye, Talakovka and Pavlopol. In these areas losses among Ukrainian soldiers there.

For Monday, from midnight until seven in the morning, the militants violated the ceasefire. Provocations with the use of small arms recorded in Papanasam and Mariupol directions. The fire affected the position of the joint forces near Novozvanovka and Water. For the current day of losses among the Ukrainian military no.