Because of the sanctions, the incomes of Russians fell by 2-3% 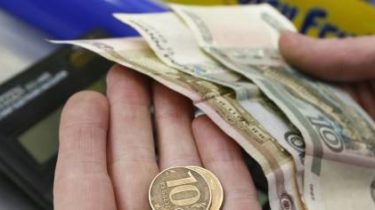 Because of the sanctions, the incomes of Russians fell by 2-3%

Companies falling under sanctions, provide a fifth of Russia’s GDP.

Western sanctions and counter-sanctions have led to that incomes of Russians for the last four years has fallen by 2-3%. The most significant limiting influence will in the long run.

So analysts say the rating Agency of ACRE, writes Reuters.

In the medium term, the role of sanctions in the weakness of economic growth is not so great: potential increase in GDP in the period from 2017 to 2018 ACRES is estimated at 1.5 per cent.

The Ministry of economic development expects to receive the final growth estimate for 2017 at 2% – as a result of data refinement on the state of the industry. The Agency forecasts an increase of 1.9% by the end of 2018 and the growth slowed to 1.4% in 2019.

Ukraine, Syria and sanctions. What topics will be discussed trump and Putin – Reuters

The main constraint is the reduction of the workforce – its negative effect on economic growth of an ACRE is estimated at 0.4% in the period of 2018-2020 years. Therefore, “even in the event of cancellation of sanctions of the medium-term economic growth is unlikely to be significantly increased.”

By the end of 2017 the total consolidated revenues of Russian companies and banks included in the “black list” amounted to 30 trillion rubles, and their contribution to Russia’s GDP ACRES is estimated at 20-21%.

The Chairman of the accounts chamber of the Russian Federation Alexey Kudrin a few months ago downgraded the assessment of the impact of Western sanctions on the economic slowdown to 0.5% of GDP.

The impact of sanctions on growth may be more tangible in the long term, both for companies and for the economy as a whole. Main barriers for more rapid growth, which would be possible in the absence of regime sanctions, is the abolition of joint technological projects, the decline in exports of aluminium and production of oil and gas, noted the rating Agency.

Much more subtle, indirect effect, manifested in the counter-sanctions, the tightening of fiscal policy, the development of Autonomous financial market infrastructure including payment system and ratings.

In response, Russia has restricted the import of certain categories of food from Western countries, so this has led to higher prices on certain goods. The cost of consumer basket increased, according to the ACRE, 2-3% during 2014-2018.

“Despite the fact that the contribution of agriculture in economic growth in this period was 1%, it was mainly due to the investments made in 2010-2013. The growth of production in the agricultural sector, directly linked to the counter, did not exceed 0.1%”, – analysts estimated the Agency.

Indicators of the level of living of the population still do not reach improvements in the real sector of the economy, according to Rosstat. Annual growth in real disposable income in may was 0.3% after jumping by 5.7% in April, which analysts linked exclusively with the electoral cycle.