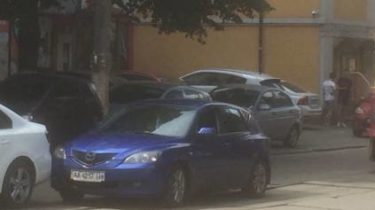 In Kiev on the street Cyril , an accident involving two cars.

About it Dnia eyewitnesses reported.

As seen in the photo, the Mazda caught up with a car that was in front.

In the accident, according to preliminary data, nobody suffered, cars received insignificant damages. At the same time due to the collision, which occurred directly on the routes of public transport, trams stopped.

Now the reasons and circumstances of the accident are established.

We will remind, earlier near Kiev from a head-on collision with the Peugeot overturned on the roof. In the car were two people, one with injuries of varying severity were taken to the er. The other died on the spot, the doctors only verified death of the man.