During attacks of militants on the front lines, was wounded a Ukrainian soldier. The situation in the Donbass 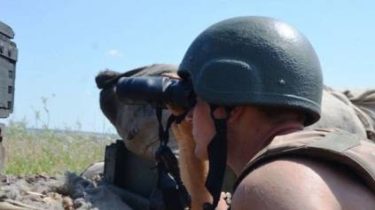 During attacks of militants on the front lines, was wounded a Ukrainian soldier. The situation in the Donbass

Thursday, July 19, at the forefront in the Donbass , the militants of 18 times fired at the Ukrainian positions.

“Russian occupation troops were active in all directions and were aimed fire on the defenders of the Crimean, Yellow, Luhansk, Svetlodarsk, Maori, Avdeevka, Sands, Heaters, Novotroitsk, Novomikhailovka, Lebedinsky, Hnutove, Shirokino and Water. The provocative actions of the invaders tried to force combined forces to open fire in response, in order to accuse Ukraine of violating the armistice,” – said in the summary of the press center of the joint forces.

Losses among the defenders of Ukraine for yesterday no. According to the Ukrainian intelligence, three militants were killed and one was wounded.

For Friday, July 20, from midnight to seven in the morning, gunmen opened fire at positions of the Ukrainian defenders near Shirokino and Water. The result of the impact of fire one soldier of the United forces were injured.