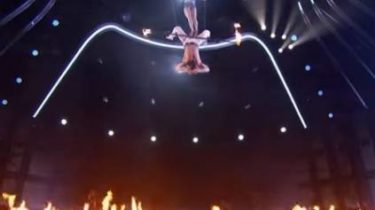 Despite this, the speech received good comments of the jury.

In the TV show “America’s Got Talent” contortionist during the performance fell from the height and fell on the stage, which at that time was a divorced fire.

A fragment of the incident appeared on the show page in Facebook.Erie Wolfe-Nielsen and her husband theis Nielsen performed challenging stunts at a height, every movement causing a shudder of the jury and spectators. Mary fell when her partner put on a blindfold. During another trick, his hands slipped and acrobat was on the floor for the fire fence, which is included for drama.

For all those in the hall watched the two year old son of acrobats and his grandmother. However, Mary Wolfe-Nielsen is not affected, since the bottom was covered mats. Moreover, their performance received good reviews of the jury and they went into the next round of the show.