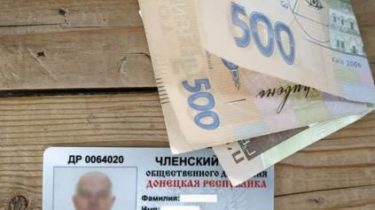 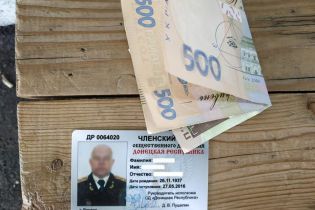 About the offender told police.

On Dinechin employees of the fiscal service and the border guards discovered a resident of Donetsk documents with the symbol “DNR.” The man offered the guards a bribe, that they “did not notice” these instruments.

This reports the press center of the headquarters operations of joint forces.

The incident occurred July 22 at the checkpoint of entry-departure “Marinka”. Fiscalini and the guards found the documents of the militants in the cache during the inspection of a Toyota Corolla. It was the business card “of the Ukrainian national-Patriotic and sports-DPR defense organization “Cossacks of the NPT,” the mark of quality “the people’s supervisor of the public movement “Donetsk Republic” and a membership card of the public movement “Donetsk Republic”.

The man offered the guards a bribe in the amount of one thousand hryvnia, so they are not reported the discovery of documents with the symbol “DNR.” Fact offers of bribery documented, reported to the National police of Ukraine.

We will remind, at the entrance to Mariupol in the Donetsk region of bus Bakhmut – Melitopol was removed and arrested the man, who was involved in terrorist “DNR”. On suspicion in Commission of crime under article 260 of the Criminal code “Creation of illegal paramilitary forces or armed groups”, the man was transferred to Mangusky the police Department of the Donetsk region.